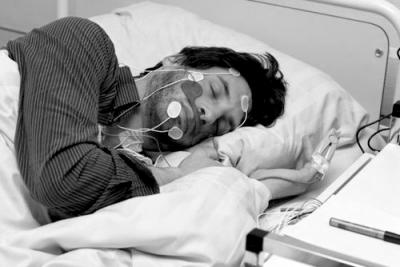 For more than 15 years, Virgile Novarina has been exploring his own sleep through writing and drawing and other people’s sleep through photography and video. He has published six books gathering night’s writings and drawings and has been invited to show his work worldwide. Since 2006 the very act of sleeping has become an integral part of his practice. During his "En somme" series of performances he sleeps in public in shop windows, galleries and museums.  On the occasion of Poets’ Night (Paris, June 2010), both artists joined forces through a live performance during which Virgile Novarina was sleeping and the sounds of his body were used as prime material for a live sound improvisation. The performance took place over 4 hours, as a continouous stream during which the visitors could experience the hypnotic sound environment whilst watching the sleeper.
Event details